Addiction as a disease 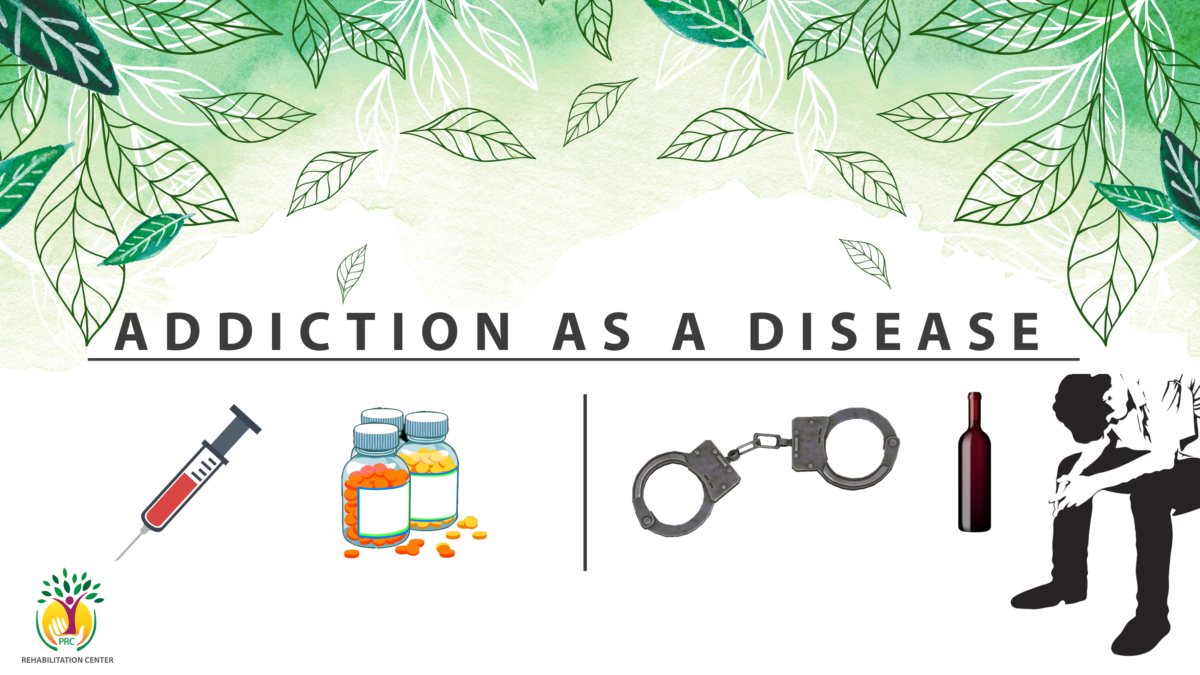 At PRC Rehabilitation Center, we understand that the life of every addict is almost similar but with his own unique story and past history. Hence, we create individualized treatment plans for every individual keeping in mind their problems and history, which is based on their physical, emotional, mental, and spiritual needs to help them achieve long-lasting recovery.

Whenever the word addiction is brought to our attention, we often label it as a bad habit. But how true is this tag associated with addiction and is it really just a bad habit or something else? Well, it might come as a surprise to you, but addiction is a chronic disease which involves changes in the brain. It is often inaccurately suggested to be result of moral weakness, a lack of willpower, or unwillingness to stop. However, it is a lifelong disease which if not treated and managed, can be potentially fatal.

Addiction is termed as a primary disease because it is not secondary to an underlying illness, such as any psychological disorder like anxiety or depression, or any other biological disease like diabetes or high blood pressure. People may start using alcohol or other drugs to mask their depression or anxiety or any other disease, but once the person with an addiction starts using alcohol or other drugs addiction emerges as the primary disorder, separate from psychological or biological disorders.

Chronic diseases are long-lasting. The brain changes caused by addiction makes the addict overvalue the drug of choice over its rational consequences. Hence, addiction is a life-long disease which requires a lifetime management to be treated effectively as it does not have any cure.

Addiction tends to grow worse with time, as brain changes continue to affect thought and behavior patterns and compulsive use affects all aspects such as emotional, physical, social and spiritual, of an addicted individual’s life. During the late stages of addiction, individuals are at an increased risk of serious medical problems, including overdose and death.

If left untreated, the result of addiction as a progressive disease is premature death. It kills in a variety of ways-some medical, some not- and that most recovering addicts can point to at least a dozen incidents during their active addiction which might easily have proven fatal.

Tolerance is the reduced drug responsiveness with repeated exposure to a constant drug use. Billions of nerve cells or neurons communicate through a series of signals and chemical messengers. When messages leave one neuron they attach to a receptor on the receiving point like a key fitting into a lock. In addiction, this communication process is disrupted. Large amount of brain chemicals called dopamine are released which overwhelm the receptors and result in a “high” that people experience. To keep that feeling going, they take the drug or engage in the behavior again and again. Eventually, the brain changes and adapts, driving them to seek out more just to get the same feeling which is called tolerance. Because of the brain’s natural reaction to the continued spike of dopamine, an increase of drugs are required to get the same desired effect and the person starts using the drug just to stave off withdrawal.

Withdrawal symptoms and their severity ranges from person to person. However, groups of drugs tend to effect people in a similar manner. Withdrawal symptoms are the collection of symptoms that a person develops once they reduce or stop the long-term abuse of a drug. These symptoms may be mild or severe like- headache, nausea, sweating, vomiting, paranoia, delusions, hallucinations, etc.

Despite all of the above mentioned things, we at PRC Rehabilitation Center Karachi, provide an effective treatment program for people to manage their disease and lead normal, healthy, and productive lives.